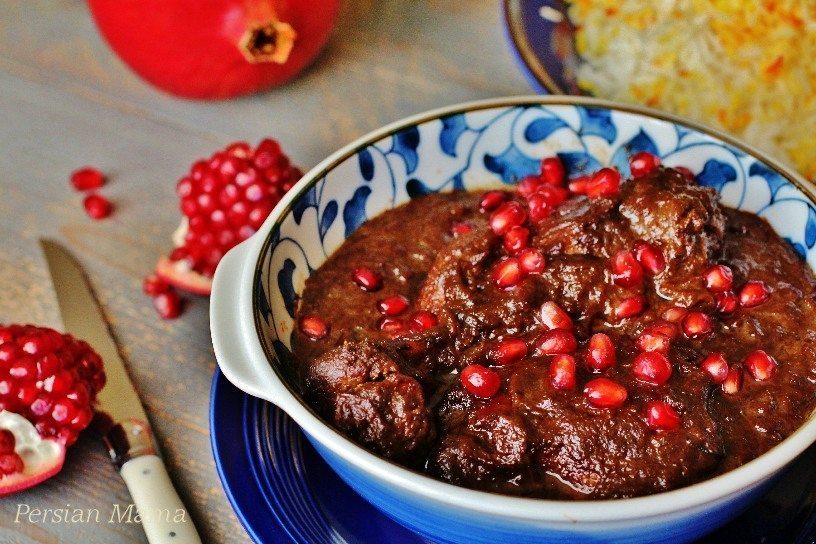 Fesenjan (or Fesenjoon) is found in Persian cultures and Iran. In Australia we are familiar with many Middle Eastern based dishes such as Humus, Tabboule, Felafel, and of course the moorish Baklava sweet pastry.  Shakshouka eggs, commonly appear in modern Australian cafe’s and Shawarmas are a favourite late night meal for many an Australian. However there are many delicious recipes that aren’t so well known, but are easily made at home with ingredients found at home with just a couple of ingredients that can be sourced at a good deli or middle eastern grocery store.

Fesenjan is an iconic dish dating back to the Achameinid Empire in 515 B.C. Made from walnuts, pomegranate paste and chicken or duck, it is common to spot it among the food often served at a wedding ceremony in Iran. At the ancient ruins of Persepolis, archaeologists discovered a tablet detailing the ingredients used to make Fesenjan, making it one of the oldest loved dishes.

Below is an easy version that takes you through step by step with images. This Fesenjoon recipe (chicken stew with walnut and pomegranate sauce) is decorated with fresh pomegranates on top making it colourful and giving it a nutty texture. Pomegranates are available in most supermarkets.

Also known as Khoresh Fesenjan, it combines two super foods that their nutritional benefit has come to light in this part of the world in recent years:  Pomegranate and walnuts. The flavor is like no other, it is tangy with a hint of sweet. The walnuts add a wonderful nutty taste to make all the flavors come together in a rich sauce.  Khoresh Fesenjan is served over saffron rice and is made using several different methods: Some make it with small meatballs, some with turkey, this one is made with chicken. The common ingredients used in all of these methods are walnuts and pomegranate concentrate, which is a thick syrup that brings a tangy sweet flavor of this recipe. Pomegranate concentrate can be purchased at some Middle Eastern markets and has two flavors with one being more sour than the other; the original is a little bit sweeter. Pomegranate molasses: This is more sour than the concentrate and in case this is your only option at the market, just add 1-2 tsp sugar.

Process the walnuts until you have a tan colored walnut paste

Fry sliced onions and add it to the chicken.

Spoon the walnut paste evenly on the chicken

Add the pomegranate concentrate, salt and freshly cracked black pepper. Cover and simmer until the chicken literally falls off the bone.