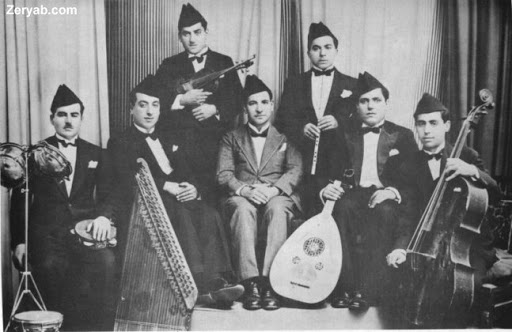 The Oud (Arabic: عود) is a pear shaped stringed instrument (chordophone) of the lute family, with 11 or 13 strings grouped in 5 or 6 courses. It is an epitomic arabic instrument. It differs from other lute type instruments by its shorter neck and fretlessness. It is typically used in: Egyptian, Syrian, Palestinian, Lebanese, Iraqi, Arabian, Jewish, Persian, Greek, Armenian, Turkish, Azerbaijani, North African (Chaabi, Classical, and Spanish Andalusian), Somalian, and various other forms of Middle Eastern and North African music.

It is similar in construction to modern lutes, it differs fundamentally to the western lute in that it has no frets and a smaller neck.  It is the ancestor of the European lute, and was most likely derived from the Persian barbat. Tuning: “Different ways of tuning the oud exist within the different oud traditions. Among those playing the oud in the Arabic tradition, a common pattern of tuning the stings is (low pitch to high): D2 G2 A2 D3 G3 C4 on single string courses or D2, G2 G2, A2 A2, D3 D3, G3 G3, C4 C4 for a course of two strings” (Paraphrased from: https://en.wikipedia.org/wiki/Oud)

Similar instruments have been used in the Middle East, North Africa, and Central Asia for thousands of years, including from Mesopotamia, Egypt, North Africa, the Caucasus, and the Levant; there may even be prehistoric antecedents of the lute.

The qanun (Arabic: قانون‎) is a stringed, ‘box zither’ class instrument “with a thin trapezoidal soundboard, that is famous for its unique melodramatic sound.”

It can be played solo, but is more often played as part of an ensemble. It is played throughout much of the Middle East, Maghreb & West Africa, Central Asia, and southeastern regions of Europe. The name derives from the Arabic word qanun, meaning “rule, law, norm, principle”, which is borrowed from the ancient Greek word and musical instrument κανών (rule), which in Latin was called canon.

A historical relative of the geographically nearby ‘santur’ (a hammered dulcimer of Persian/Iranic origins), the qanun is thought to trace its origins back to Assyria, where an ancestral homologue might have been used in Mesopotamian royal courts & religious ceremonies.”(paraphrased https://en.wikipedia.org/wiki/Qanun_(instrument))

If you would love to hear and learn Australian based Oud & Qanun players and bands then click on these links:

Lessons and workshops are available from: