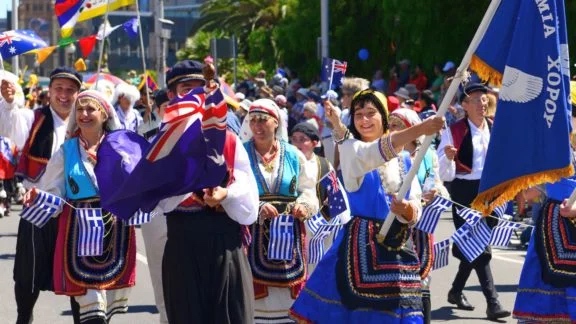 Research from a 2017 study conducted by Lecturer in Management, at Swinburne University of Technology, Dr. Asanka Gunasekara, concluded that those who adapt to Australian society, a process called “Australian acculturation”, experience a greater level of personal well-being, and a stronger sense of Australian identity, than those who don’t. The results were based upon a survey of more than 300 migrants to Australia,

Dr. Gunasekara‘s study looked at the relationships between time in the host country, acculturation and the sense of personal well-being among non-Western skilled migrants in Australia. She found that migrants who reported having a higher sense of personal well-being had also acculturated more effectively to Australian culture and lifestyle than to their country of birth heritage and/or culture of origin, as well as having higher English language competency and a deeper sense of Australian identity

In graphic form, this research can be seen to be measured, against already known data depicting personal well-being, using the Australian Unity Personal Well-being Index (PWI). The PWI measures the level of a person’s satisfaction using a points system from 0 to 100.

It is possible that higher education, specialist skills and better salaries may contribute to higher levels of personal well-being among immigrants, compared to the Australian population as a whole.

However, the lowest score for skilled migrants was found to be in the sense of “community connectedness”. Even though it was still higher than the rest of the Australian population, as recorded by the PWI. Community connectedness refers to the number and strength of connections a person has with others in their community.

“Rather than full acculturation, some skilled migrants will maintain their own culture, and add layers of cultural practices from their host country. For them, “biculturalism” (being able to switch between host and heritage cultures) is more realistic.”

Consider a family from the Middle East who moves to Australia while keeping their culture alive through food, language and social circles, but also goes to community sporting events, actively engages in public schools, community organisations and clubs and even chooses to support an AFL/NRL football team.

Full acculturation involves significant, if not total abandonment, of previous heritage, cultural practices and traditional values as the immigrants adapt to their new host culture. This is virtually unheard of among first generation non-Western migrants, with the research showing that acculturation into a Western lifestyle is more unlikely for those people, who prefer to retain strong ties to there history, heritage, traditions, relatives and previous culture.

Lack of significant acculturation can unfortunately lead to social isolation for many new immigrants who are older and tend to be more set in their ways. However, many younger immigrants are more socially flexible and more willing to adopt, and adapt to, new ways of living and to various cultural influences apart from their own heritage. Younger immigrants are also quick to contribute to the socioeconomic well-being and work culture of Australia by bringing much needed skills, knowledge, technology and investment to Australian Society.

For older immigrants a certain degree of effective acculturation is necessary to help avoid social isolation in their senior years. A 2015 study found that older people from culturally and linguistically diverse backgrounds are at greater risk of depression than Anglo-Australians. Low-scoring people in the “community connectedness” domain, are more likely to fall into a social isolation trap as they enter their senior years.

The full Research and Report by Dr. Asanka Gunasekara can be found, and downloaded, at this link. https://www.sciencedirect.com/science/article/abs/pii/S0147176718303602