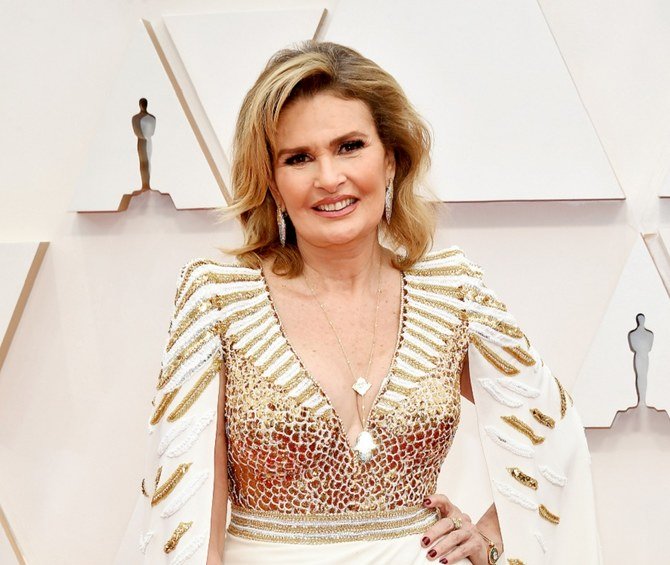 DUBAI: The Oscars ceremony, now in its 92nd year, was once again held at the Dolby Theatre in Los Angeles, California, bringing with it a drove of celebrities who descended upon the red carpet on Hollywood Boulevard wearing their finest threads to acknowledge and celebrate their peers in film and television.  The Oscars are one of the most-watched red carpets in the world, meaning the stakes are high for stars to bring their fashion A-game, and they did not disappoint.

Meanwhile, Canadian-Korean actress Sandra Oh looked to the House of Elie Saab to dress her for the occasion, choosing a statement, pale pink ruffled confection with larger-than-life, tulle shoulders that was plucked hot from the Lebanese designer’s most recent couture runway, which he showcased last month in Paris.

Elsewhere on the red carpet, E! News hosts Giuliana Rancic and Lilliana Vazquez both chose designs from the region for the biggest ceremony of the year. Rancic stunned in a flaming red, feather-embellished creation with zipper detailing from Omani couture label Atelier Zuhra, while Vazquez chose a long, strapless beaded dress from Beirut-born designer Rami Kadi.

And although Waad al-Khateab’s Syrian war documentary “For Sama” did not win the golden statuette for best documentary feature, her dress from fellow Syrian designer Reem Masri, which read in Arabic “We dared to dream and we will not regret dignity,” proved that you don’t need to take home an award to be a winner.

Other memorable looks include Penelope Cruz’s archival Chanel creation from the 1995 haute couture collection and Scarlett Johansson in a transparent corseted Oscar de la Renta design.  “Black Swan” star Natalie Portman made a feminist statement in Dior’s ethereal embroidered cape with the names of female directors overlooked by the Academy— including Greta Gerwig of “Little Women”— stitched into the fabric.

Meanwhile, the push for sustainability was apparent via chic pieces like “Bombshell” star and best supporting actress nominee Margot Robbie’s vintage Chanel spring 1994 couture gown that boasted a jewel pendant and cuff sleeves that were completely detached from the strapless navy dress. “Booksmart” star Kaitlyn Dever also used the red carpet to to promote more eco-friendly practices in the industry by donning a crimson Louis Vuitton dress made with the Red Carpet Green Dress (RCGD) sustainable standards in mind.

Jane Fonda, 82,  took to the stage in a recycled, crimson beaded Elie Saab gown she previously wore to Cannes in 2014, to present the best film award.

Some Good News: How rain is transforming landscapes and the emotions of rural people