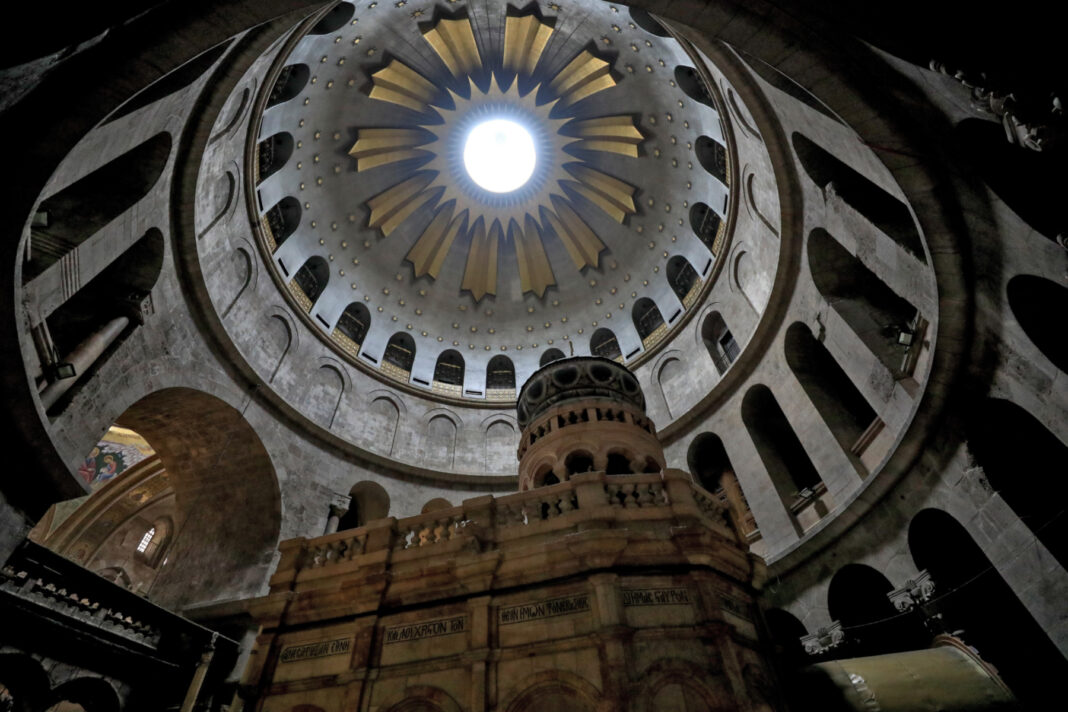 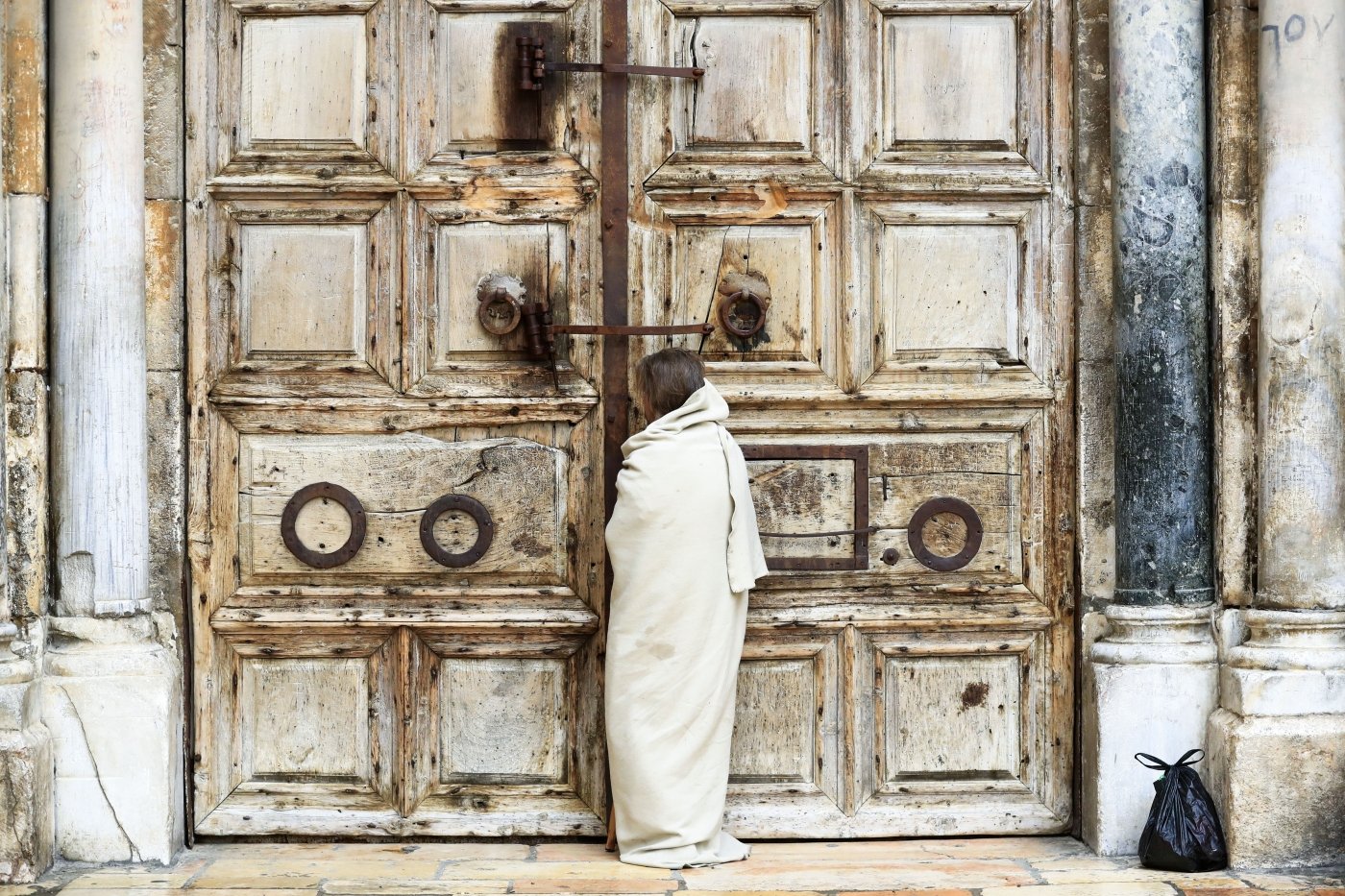 A Christian pilgrim dressed as Jesus Christ stands in front of the closed door of the Holy Sepulchre Church in Jerusalem’s Old City on 10 April 2020 (AFP)
Any other year, Joseph Erakat would be managing 170 employees and a fully-booked hotel, as the Easter season normally brings an influx of visitors to Jerusalem.

This year, with the coronavirus pandemic spreading across the world, he is living in the hotel full-time with only 10 employees and zero guests.

Erakat is the general director of the Notre Dame Center’s guesthouse, part of a complex featuring a hotel, restaurants, and a church overlooking the Christian quarter of the Old City.

The Easter holiday is a major tourism season for businesses in Jerusalem. In early March, much of his staff was laid off. By mid-month, the hotel had no guests left and was forced to reduce its workforce to the bare minimum; maintenance and cleaning staff are primarily the only people left.

“I came to stay because I am serving the employees here,” Erakat told Middle East Eye.

As Good Friday arrived in Jerusalem, the streets were quiet.

Every Good Friday, except for this one, thousands of pilgrims and tourists would walk from the Lion’s Gate at the edge of the Old City, along the Via Dolorosa route to the Church of the Holy Sepulchre – the path Jesus Christ is believed to have walked on the day of his crucifixion.

For the first time in centuries, public life and tourism have been put on hold in Israel and Palestine during Easter and Passover, with religious sites closed until further notice.

As the world grapples with a near-universal shutdown of activities, religious holidays have been among the first events to be affected, with experts saying versions of social distancing could remain in effect for at least 18 months.

The economic toll has been severe.

Many of Erakat’s workers are from the occupied West Bank, and as Israel restricted crossings for Palestinian labourers, many have not been able to receive their paychecks.

Since some of them do not have bank accounts, Erakat has settled on an ancient solution: he hand-delivered cash to a church that then distributed the money to a network of churches in the Palestinian cities where the workers live.

But there will be long-term effects as well, Erakat said.

“It’s a big problem. The biggest damage was for the hotels and tourism industry,” he said. “We cannot close Notre Dame, it should be open…we have to keep it open to at least serve the community.”

But like most churches – both in Jerusalem and worldwide – Erakat will be holding Easter services via livestream, led by two priests that live in the Notre Dame compound.

In much of the western world, where the majority of Christians are Catholics and protestants, Easter takes place on 12 April. But in the Middle East, where a large percentage of Christians are Eastern Orthodox, many celebrate on 19 April.

To mark both Easter days, there are typically two full weeks of events taking place around Israel and Palestine. During the Orthodox holidays, pilgrims carry a fire from Jerusalem to Ramallah, and cities are typically filled with scouts holding parades.

But the pandemic has brought quiet to Jerusalem, something that many wars and uprisings have not achieved.

In a country still largely defined by its religious history and its diverse and passionate religious communities, shutting down spiritual activities is an unprecedented move.

Omar Haramy, the administrator at Sabeel, a Palestinian Christian theology organisation in Jerusalem, believes these are unique times.

“We don’t have many experiences in our lifetime where the whole world is focusing on one thing…There’s so many unknowns and uncertainty, people are trying to figure out when this will be over and when things will go back to normal.”

The Church of the Holy Sepulchre, a holy Christian site in Jerusalem’s Old City where some believe Jesus’ tomb is located, closed its doors to the public on 25 March due to fears of spreading Covid-19.

The last time it was closed was reportedly during the 14th century, as the Black Death spread across Europe killing tens of millions of people, the keyholder Adeeb Joudeh told the media after he locked up the church.

Per tradition, worshippers typically gather for a burial procession at the Church of the Holy Sepulchre on Good Friday.

For Haramy, the current crisis highlights the ways that spirituality endures – even when people are banned from congregating.

“Watching from social media, people are praying from their houses,” he said. “It’s like we suddenly have 5,000 new churches in Jerusalem…one way or another, it got people reflecting, leading the services inside the house, living the spirit of Easter.”

June 16: Tarab Ensemble Is Back At Open Studio in Victoria