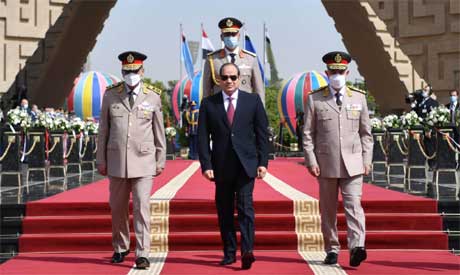 Egypt’s President Abdel-Fattah El-Sisi said on Sunday “war was not Egypt’s aim, but peace was the ultimate goal and supreme target” as Egypt is marking the 39th anniversary of the Sinai Liberation Day.

Egypt celebrates Sinai Liberation Day on 25 April each year to commemorate the completion of the withdrawal of all Israeli military forces from the Sinai Peninsula in 1982, following the 1979 US-brokered Camp David peace accord.

The Camp David peace accords were signed after the victory of the Egyptian army over Israeli occupation forces in the October 1973 War.

In a televised speech, El-Sisi said the anniversary “will remain proof of the heroism and sacrifices of the Egyptian military and the cleverness of the Egyptian negotiator in preserving the soil of the homeland and protecting its dignity with solid determination.”

The saga of reclaiming the land has gone beyond being a military and diplomatic victory, but has extended to becoming a timeless example of conquering despair and frustration, El-Sisi added.

Sinai has always represented a strategic depth for Egypt and enjoys a firm position in the hearts of all Egyptians, he said, adding that today’s celebration generates renewed momentum to work on protecting every inch of the nation.

“The liberation anniversary [of Sinai] represents an inexhaustible source from which future generations draw the meanings of pride, struggle, loyalty and affiliation,” El-Sisi said.

Thursday will be a day off on the occasion of the Sinai Liberation Day that was usually a national holiday in Egypt; the government, however, has decided since last year to grant Thursdays as a day off in the case of national holidays falling on weekdays.

The president moreover stressed that Egypt’s nowadays’ battle of construction and development is no less important than the previous war, saying: “My confidence in the great people is without limits, and our ambition for tomorrow will be achieved with our hands today.”

Later in the day, President El-Sisi laid a wreath at the Memorial of the Unknown Soldier in Nasr City in Cairo. He was accompanied by Minister of Defence Mohamed Zaki and Armed Forces Chief-of-Staff Mohamed Farid.